Things You Should Never Say at a Funeral

Posted on April 11, 2022 by Lifesong Funerals under cremation
Leave a comment

A funeral service is often a charged moment where many emotions are expressed. In many cases, the survivors, friends, and other persons close to the deceased would be in precarious mental states. In this situation, they will need words of comfort and reassurance from the mourners and well-wishers present. Based on our experience with funeral service in Quincy, FL, we have come up with sentences you should avoid mentioning. In addition, we also explain why these utterances are bad.

Top Things You Should Avoid Saying During a Funeral

When you come across most of these sentences, you’ll notice that they seem harmless initially. But when you study them further, you begin to discover how negative they can be.

Obviously, this sentence aims to comfort the bereaved and make them see that their loss is not the end of the world. In essence, you want to make them understand that things could be worse. However, to the survivor, this will sound insensitive. Nothing can be much worse than losing a loved one in that particular instance.

Another seemingly harmless sentence aimed at reassuring the bereaved that you’re with them. While you might have experienced grief in the past and may truly understand the feelings attached to it, you shouldn’t say that. It isn’t your loved one buried or cremated in the current instance. Thus, you can’t relate to the emotions running through the minds of the mourning survivors.

Saying “I know how you feel” may sound like you’re dismissive of their emotions and that their feelings, in this case, aren’t special. The truth is that people are unique, and their approaches to situations, including grief, differ greatly.

Another variation of this is, “They have gone to rest.”

Again, this statement appears harmless but in reality, it is not. Unfortunately, we often hear this among persons who believe in the afterlife, especially those practicing major religions.

However, while the dead may have gone to a “better place,” the survivor is left in a place of agony and pain. As such, trying to lessen the importance of their death by saying this will most likely not achieve the goal of lessening the bereaved’s pain.

Or “You will heal soon.”

The purpose of this is to help the survivor pass through the current trying times by making them realize that it will soon be over. Unfortunately, as good as your intentions may seem, they may sound reckless and insensitive to the person who has lost their loved one.

In essence, you’re saying that the memories of the departed will soon wash away with time. While that is true, you shouldn’t mention it.

5. “Everything happens for good”

Again, we find this a lot among religious folks. We can say this ranks as one of the most callous things to say at a funeral.

No dead person’s relative will believe that the pain they are feeling due to the death of their loved one was predestined. Worse still, they can never understand that the death happened for a “greater good.” As such, avoid mentioning it. 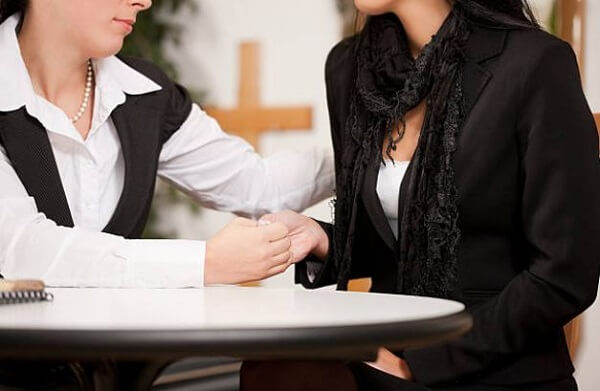 What Should You Say Instead

A tidy majority of those common statements in funerals are problematic. However, to avoid saying offensive things, we can say things like “It’s okay” or “I’m sorry.” Better still, we can merely be present and comfort them with gestures such as hugging and holding hands.

The funeral service in Quincy, FL is not a palatable event for anyone. However, no matter how sad we may feel, the most heartbroken persons will remain the deceased’s family or direct survivors, and they need your support.